Like i understand this sticker : the charger is a refurbished one.

Not really a problem because many industry do this (hardrive industry for example, but gearbox industry, too)

Where did you see that?

If in fact it is refurbished, that implies a fairly low cost and easy repair to fix an OBC 's internals. I'm thinking something perhaps in the pilot signal and control circuitry, since those would be the only cheap parts in there. I'd be interested to see inside one of these to see the design.

If I recall correctly, the Leaf had an issue with a diode and resistor burning out on the pilot and square wave signal for the J1772.

Here's an interesting question - has anyone who charges primarily with an OpenEVSE had an OBC failure?

Car is at the dealer now. The service writer said something to the effect of "oh another one" which is both comforting and concerning.

Here's an image of my original OBC. I'll update when they install the new one.

The dealer fixed my car in three business days, so not too bad compared to what some have been through.

Car charges fine again but I haven't checked to see if the amperage draw has changed. The EPCU module p/n 36600-0E140 is the original one that was built with my car in August of 2014.

mtndrew1 wrote:...Oddly, the topmost portion that shows v10.1R remains in my car; it's the "OBC MAIN CASE BOTTOM" which is new.

mtndrew1: Thanks for the pictures, glad your car is fixed. The OBC is the second unit down in the stack. They do no change any of the other parts.

Here's some open cut images. Top two from the 2017 EV Expo.
Bottom one from the 2016 EV Expo.
I had an argument with the sales guy because he insisted that the cut-out m odel shown in 2017 is the newer version, and not the same model from the year before. I was hoping to see the new MY2018 version which is advertised but has not yet been shown. 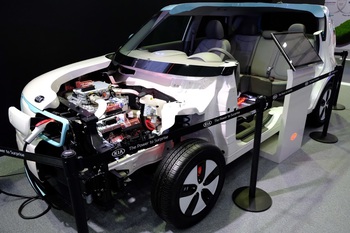 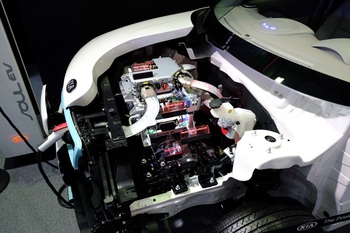 From my local guy in the Kia Service (not the seller !) :

- it has changed 2 chargers since it check the Soul EV.
- failed chargers only append BEFORE 5000km.
- start of selling = september 2015.
- it has already check 8 Soul EV (april 2017).
- it doesn't have a formation for the Soul EV (they read a sheet of instructions to replace a part or test with GDS android tablet with bluetooth GDS red dongle with a green bar LED and wait an analyse of Kia Technical Support from MyKia request).
Kia Soul EV 2016 Ultimate 27 kWh - Mountain hard driving (fast). Drain 1/3 of Battery after 32km. - Unlimited highway speed (153km/h at regulator).

Also a video of the blue lights flashing together to show an error.
https://www.facebook.com/mario.briard/v ... 442913896/
The codes for using Torque Pro can be found by clicking the link in the website icon under my user name on the left.

On the German forum there is a possible explanation why the OBC is failing.

According to the workshop manager, who was last week at the KIA "EV advanced training", the reason is that in versions up to V12 hair cracks in the OBC housing can occur. If there are cracks, they become larger at high temperature differences.

If the cracks gets bigger, coolant enters and there is a short circuit.

Here in the Netherlands almost all public chargers are 11 kW, but these are 3 phases. And also home chargers have a maximum of 3.6 kW, because most househoulds have 3 x 25 A, so charging with 16A/220 Volt = 3.6 kW. So the Kia Soul EV can only charge with one phase, 3.6 kW. So the OBC gets less hot? Could that be the reason that in some countries we see more failing OBC units?

This might explain why there seem to be more OBC failures in Quebec than elsewhere - winter gets very cold and L2s will be at 6.6kW so the temperature difference between the inside and outside of the OBC will be extreme and make any cracks worse.

-
Yes, this is the most compelling of all the stories we have heard on why so many OBC errors are occurring.
But I am not convinced it is true. I will wait another year to see what happens with the newer versions, before accepting this problem is over.

Reasons.
Yes, this problem first occurred in Norway and Quebec.
But, later it is also occurring in California and Jeju. Two places with less climatic extremes.

Yes, the first response by Kia to fix the OBC issue was to reduce max current from 30A to 27A.
Consistent with the problem being caused by too much heat, temperature differential. Lower current = lower heat.
But, I am not seeing any reduction in the frequency of this problem after that first 'fix'.

There are also comments that the replacement OBC's use a refurbished old OBC case.
It would be really stupid to do this if the original problem was the case, not the electronics inside.
Although that would explain the overly large number of second and third failures.

I am also not convinced that the problem has been 'fixed'. We don't have evidence yet that V14s are failing, but there are a lot of MY2017's reports coming in.
The codes for using Torque Pro can be found by clicking the link in the website icon under my user name on the left.
Post Reply
Load more posts
335 posts