by ricardar
KEVIN GRAYBEHL. Tell him Ricardo sent you, he has the parts in stock. Says he hasn't had a single car come back twice for the OBC issue.. *fingers crossed*

by ricardar
New OBC. After celebrating my wonderful photos from last time, I could not shoot a decent photo this time around. Guess I shot off my mouth too soon by nibularr
yours shows same version number as my replacement, my build date was a month before.

i have not had any issues since replacement KNOCK ON WOOD

I was able to see Kevin today. Confirm need to change the OBC, but he don't have any in stock. He say he have one already order that will come in any days. He claim it should done in days. *fingers crossed* Anyway he got me a rental for free so I am good (Mazda 2 ouch I miss my Soul EV, but since I need to go the Sac this weekend I will use this over my minivan to save some gas )

ricardar wrote:KEVIN GRAYBEHL. Tell him Ricardo sent you, he has the parts in stock. Says he hasn't had a single car come back twice for the OBC issue.. *fingers crossed*

by ricardar
Bummer that he was out of them (I could have sworn he told me he still had another one after mine was replaced), but hopefully he gets more in stock soon. I borrowed my in-law's Highlander for a couple days over the weekend while I was waiting to take my in Monday morning and Ill admit I've gotten very spoiled by my soul... couldn't wait to get back to it.

JejuSoul wrote:The Charging Fault Error is the one main fault that has effected about 10% of our cars. It has now been fixed. The replacement of the On Board C harger is expensive, but no driver has ever paid for this. It has always been covered by the warranty. There is also no need to worry that these faulty OBCs will last until after the warranty expires, and then need to be replaced at the owner's expense, because Kia is now replacing non-faulty old OBCs with the new fixed version at the annual service check (this has been mentioned in reports from Korea, Canada, and France).

There is now a report of a non-faulty OBC being replaced in Germany. - Austausch von OBC und Trockner der Klima
with google translate -

Today I got a call from my dealer .... the onboard c harger is to be exchanged ...
he did not call it a recall, but only an improvement to be done at the next visit...

by wrickcook
I scheduled my 1 year check up (a few months late) at Renton CarPros (Renton, WA).
I tried to push them to swap the OBC, linking to articles and explaining the problem. They talked to the warranty manger and they said they cannot do it unless I am having issues with the car (because the part is >$2000).

I explained it could mean the difference between a couple hours of work to change the part, and them paying for weeks in a rental car while the part comes in, but they didn't care.
I pushed hard enough that the lady got a little fed up and transferred me to someone else, but I could not get anywhere.

Looks like I just have to wait and get stranded

by JejuSoul
Sometimes things take a while to get fixed, but do get fixed eventually.
This is for the T esla M odel S - from a Plugin America survey - https://survey.pluginamerica.org/model-s/charts.php 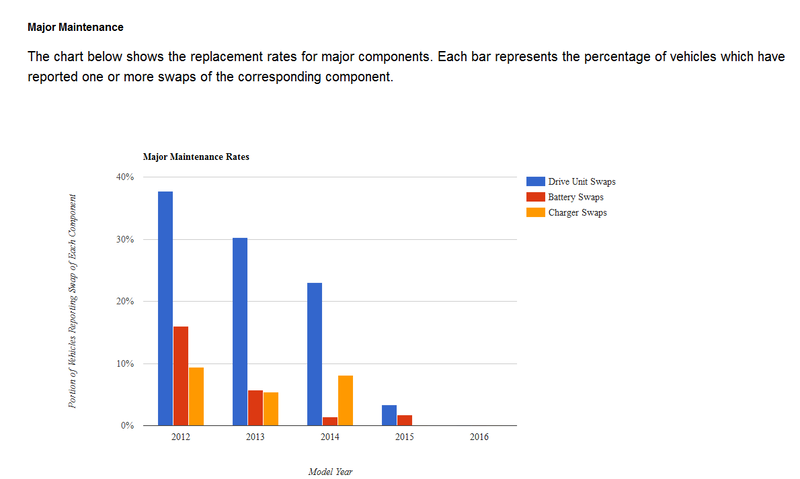 wrickcook wrote:Looks like I just have to wait and get stranded

At least there are several CHAdeMO stations around the Seattle area. My OBC died when I was trying to charge at PLU in Tacoma. Fortunately I charged enough in Tumwater to make it back to that charger on my way home. I then charged in Centrailia, Castle Rock, and Ridge Field to make it down to Kia of Portland to the dealer. This Monday it will have been two weeks since I took the car in.

by JejuSoul
.
Here's another EV that has had OBC problems just like ours - the B MW i 3 and its KLE - (Komfortladeelektronik - the German term BMW uses for its OBC). It took a couple of years before a fix was out. Before that lots of replaced OBCs and downgraded charging.

BMW To Finally Replace i3 Onboard Charger To Restore Promised 7.4 kW Charging Rate

Re: BMW i3 REX - Taking too long to charge on Maximum Setting

TomMoloughney wrote: ...The problem is some i 3s (BEV and REx) are having a failure of their onboard c harger and the result is the car will only charge at half the usual rate (roughly 3.5kW instead of around 7kW). BMW has identified the cause and is in the process of developing a permanent fix for this which I believe will be a new KLE. In the meantime, if your KLE fails and you bring it in for the service, they will install a new KLE(the same one as the one you have), and then reduce the charge rate by about 20%.
.. No, I realize it's not ideal, but BMW does indeed have a permanent fix and the cars will indeed have the 7.2kW charge rate we were promised. I'll update more as I get information on this.