I just picked up my White 2016 Soul EV+ from the shop today. It went into the shop on December 5 and was ready yesterday afternoon, December 20. Here is a composite of the three stickers from the two OBCs.

Jeju, what does the top right label say at the bottom? Is it Daewoo or another company name?

I need to go check the charge rate on this new OBC to see how it compares to the old one.

EDIT: I just checked the charge rate on my 20A EVSE and it charges at 18.5A just like the V12.2R charger in my Blue Soul.
David D. Nelson

GizmoEV wrote:Jeju, what does the top right label say at the bottom? Is it Daewoo or another company name?

GizmoEV wrote:I found the same thing. I wondered why the L1 Kia EVSE took longer than the displayed charge time before charging. I measured the actual current and discovered that the car charges at a bit lower rate than what the EVSE tells it it can have..

Here is the data from my car charging from a 16A stand. 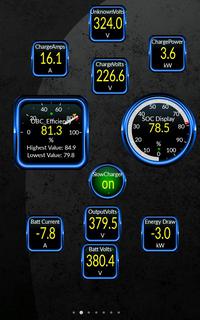 Yes jejuSoul, I'll be quite upset with the snake oil salesman of a dealer I have if the car has been stocked for so long.

I bought a new car, no second hand, exhibition or pre used, just a brand new car. They never told me it was going to be a car stocked for such a long time.

When received it had almost 9 Km on the odometer.

I would like to know the factory production day of the car which is not necessarily the same as the OBC date.

JejuSoul, using my VIN can you guess a production date for the car? VIN #8390 would be about October 2015. There were 5,000 Soul EV's produced in the year from June 2014, and 10,000 after that.
So the build date is 2 or 3 months after the OBC was produced.
The car probably left for Europe in November and arrived in January.
Maybe got to Spain in February, and sat for 9 months before you bought it.
For any other car than an EV, that is normal, and of no consequence.
For an EV that wait does allow the battery to deteriorate.
You'll still have SOH 100% for another year or so, after that it depends more on how you use the car in the meantime, than that initial loss from sitting unbought.
The codes for using Torque Pro can be found by clicking the link in the website icon under my user name on the left.

i wonder what the different in the P instead of V

JejuSoul wrote:I just noticed that the MY2017 seems to have a redesigned plastic cover. I have no idea if the info above still applies.
Maybe the photo below is just a Photoshopped image for a marketing shot. I have never seen a 2017.
Although I am guessing the MY2016 was still the same.

Thank you JejuSoul. Once I get my car back I'll try to get a straight answer from the dealer about the manufacture date.

JejuSoul wrote:You have the new v14.1R OBC.
It charges at the same level as a MY2016 v12.1R. Can you check what version of the Torque Pro codes it uses.

How do I check the version of the Torque Pro codes? I'm using what SoulEV2016 posted. IIRC, I've only made modifications to the energy use rate so it displays mi/kWh.

How fast did the older v11.1R charge?

It charged at 18.4A as measured by a clamp meter on the line going to the EVSE. IIRC, that is what Torque Pro displayed as well. The difference could be just error in measurement.

GizmoEV wrote:I found the same thing. I wondered why the L1 Kia EVSE took longer than the displayed charge time before charging. I measured the actual current and discovered that the car charges at a bit lower rate than what the EVSE tells it it can have..

The thing I noticed when taking those measurements is that I saw my meter spike to 21A when charging started and then drop back to 18.4A. I'll have to take measurements again to see if it has the same spike. I'll also try to test on a 30A+ station and see what the full speed charge rate is.
David D. Nelson

I forgot to mention that the repair ticket said that the error code was P1CF5 OBC Grid Check. This might explain why the error the car gave was something about an external charger error. Also, I saw the cost of the repair on one of the pages I had to sign. The OBC was just over $2400 and the labor was just over $200.
David D. Nelson