Looking for my Second EV

-
Congrats on getting a good deal for your new Soul EV.

Calaveras wrote:...
The dealer confirmed that the second owner only gets 5 year warranty on the battery for degradation to 70%
...

No, this is incorrect! The Battery Capacity Coverage lasts ten years.
The warranty manual for your car is here. USA: 2017 Soul EV Warranty Manual 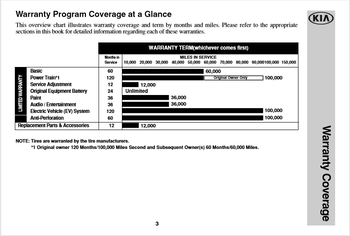 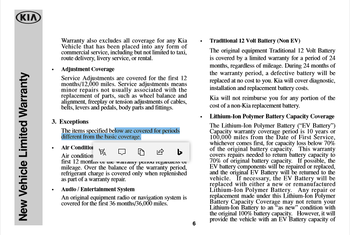 The Power Train warranty is as you described. But the EV System is not.
The section Lithium Ion Battery Capacity Coverage on page 6 is fairly clear about this.
The codes for using Torque Pro can be found by clicking the link in the website icon under my user name on the left.

After my experience with the Leaf I should have known not to go by what the dealer says.

Thanks for the info, it makes me even happier that I went with the Kia over the Nissan.
We drove it home from the dealer and had to stop by a level 2 charger to make it, because it is a climb in elevation. We took it shopping today and keep learning cool features.
2016 Leaf S bought used in 2017 24 kWh no QC
2017 Soul EV + bought in 2019 for spouse.
Daily commute is 55 miles round trip with a 1,900 foot elevation climb on the way home. Gold Country California

Typical of dealer misinformation, but the owners manual makes it pretty clear. I bought a CPO just so there was no question about it!

especially having the peace of mind of the original warranty being in effect until 2026. I have done years of research before this and my choices were this and the leaf and the toyota rav4 ev. The kia soul was the best option for me giving me the best suv feeling while driving plus the cargo space comparable to a rav4 with the prices comparable to the leaf. Of all the ev's kia has the best warranty with its 10y drivetrain. Also the battery management system after researching I found was overall better on the soul even with my 27kw I was shocked to see the gom read 104mi at 94% It had 38k when I bought it (east coast area) .

Every used leaf that I saw on internet ads in the same price was either more expensive since the 30kw only is available for 2016 and up and the few sv listed were around the same price as the base soul 1gens or a few k's much less money but for reasons like 2011-2012 sl models with more than 3 bars degraded or because they are s models with no FC port. I am not bashing the leaf I still appreciate that they are the most least expensive option since been mass produced from 2011 and have a high reliability record for everything other than the battery with constant reports of little to no maintenance. If I needed a ev to get me around for the least price thats the one.

The Rav4 ev I really wanted because of its size and performance. It has great range 100+ miles even after years 2012 - current and has a big cargo area. However they were only available on the west coast and would cost K's to ship so the shipping had to be added to the price. Also they lack a DC charger unless you can afford to have a Jdemo installed but again that would cost more on top of the shipping. Researching the soul I knew to expect it to be lower to the ground and the cargo vol is less but tbh I was surprised when I actually saw one and test drove it and felt like I was in a suv. The cargo when seats are down is nearly the same to me just a inch or 2 shorter than my previous 2002 ford escape all the items including 2 bmx bikes fit in the soul ev the same way. So again the soul was the better option here. I take nothing away from the rav4ev I like how rare it is the largest affordable used ev on the market compared to audi e tron or a model x or y.

The chevy Bolt is also a honorable mention but finding a used one in the price range and location was tricky since the battery being doubled in size makes it more expensive right away. I think had I found one a few less k's I would have made a move on one. While overall smaller and more car like It was very roomy in the back seats similar to the soul and had some great tech features like the some of the leaf models have with surround cameras auto start remote functions without the need to being plugged in. The value for the range on those are the best to date but again the 2016 kia soul just works out better for my needs currently.

The soul is my best choice I am still in awe of the value and efficiency this 27kw feels like a 30kw and the size is close to the escape / crv /rav4 smaller suv's. Caleveras Congrats ! That looks like a nice price for a 2017 + and the dealer may be wrong be sure to check with kia directly on the powertrain remaining as I have 6 years left on mine a 2016 model so you should have 7 years.
[color=#FF4000][color=#BF0000]2016 Kia soul ev [/color][/color]

@freesoulev
As caught by others, the warranty info I had was wrong.

Just ordered weather tech floor mats which are great for the snow days.

I am still deciding on the trunk mats. I usually keep a big ice chest back there for shopping trips and put anything that spills in there.
2016 Leaf S bought used in 2017 24 kWh no QC
2017 Soul EV + bought in 2019 for spouse.
Daily commute is 55 miles round trip with a 1,900 foot elevation climb on the way home. Gold Country California

We did our longest road trip today. From east of Sacramento to Monterey. We charged in Patterson and in Hollister on the way there and we charged in Santa Nella and Stockton on the way home.

We got one warning light come on the suggested some issue with the EV system. If was on the way back. I suspect doing 3 DC QC in one day was heating the battery or coolant too much. We got a hotel in Santa Nella and let it cool down. In the morning it was fine. Total cost for charging was under $40. It was just a pain to have to use three different apps or cards to charge. At least one of the chargers was not on plugshare app yet. It is the closest to a one stop app for me
2016 Leaf S bought used in 2017 24 kWh no QC
2017 Soul EV + bought in 2019 for spouse.
Daily commute is 55 miles round trip with a 1,900 foot elevation climb on the way home. Gold Country California
Post Reply
Load more posts
17 posts