Well, 250mm is about an inch and a half too long, but I didn't need to trim it because pokes through the hard foam insert (see images). I didn't want to trim the rod because sometimes that can make it hard to screw anything on the trimmed end. It worked out just fine though. Rods of this type seem to come in widely varying sizes, like 100mm (way too short), 250mm (a bit too long but not too bad) and 1m (way, WAY too long).

You can also see the washer to keep the tire from putting too much pressure on the black ventilation enclosure. 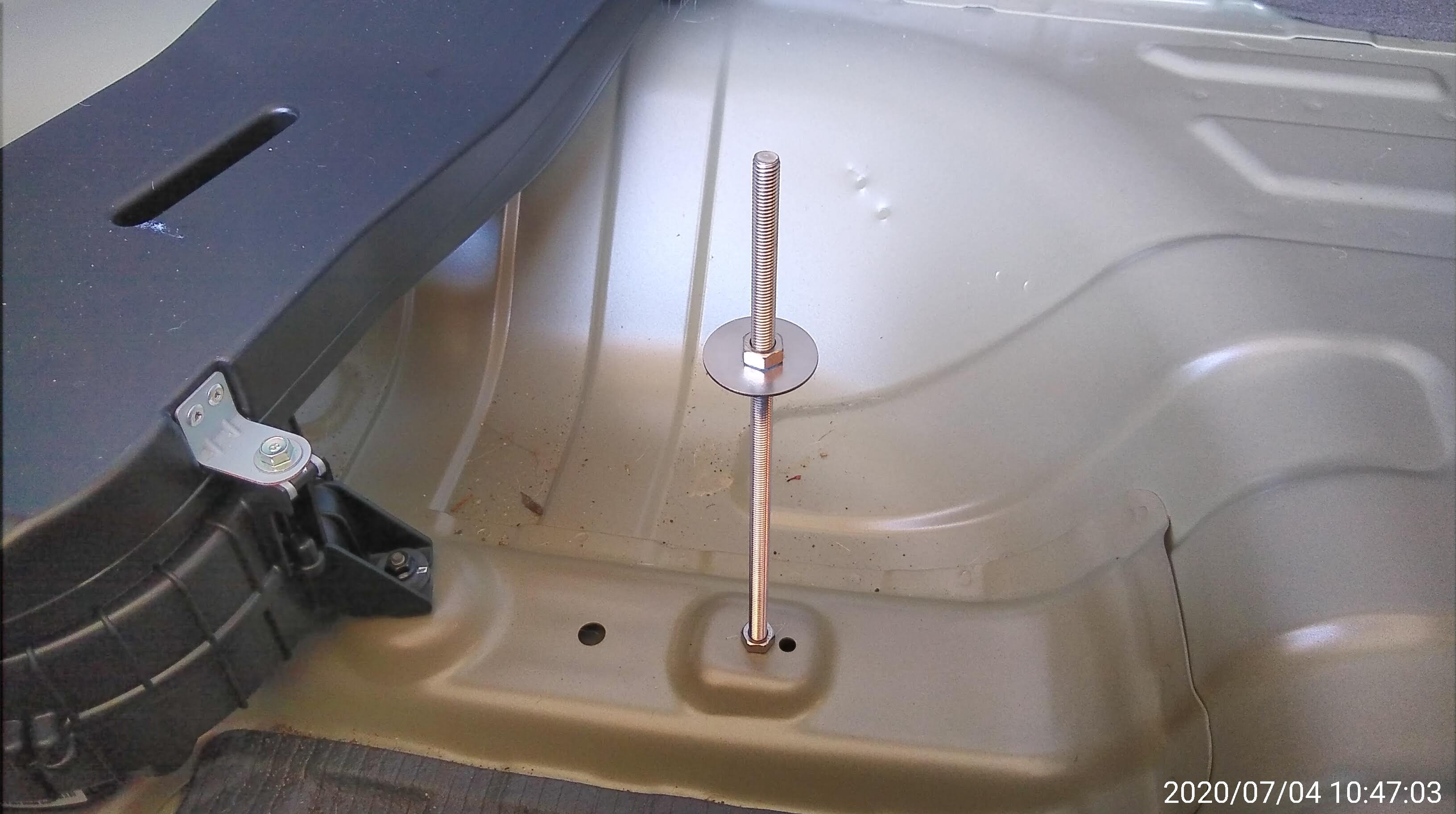 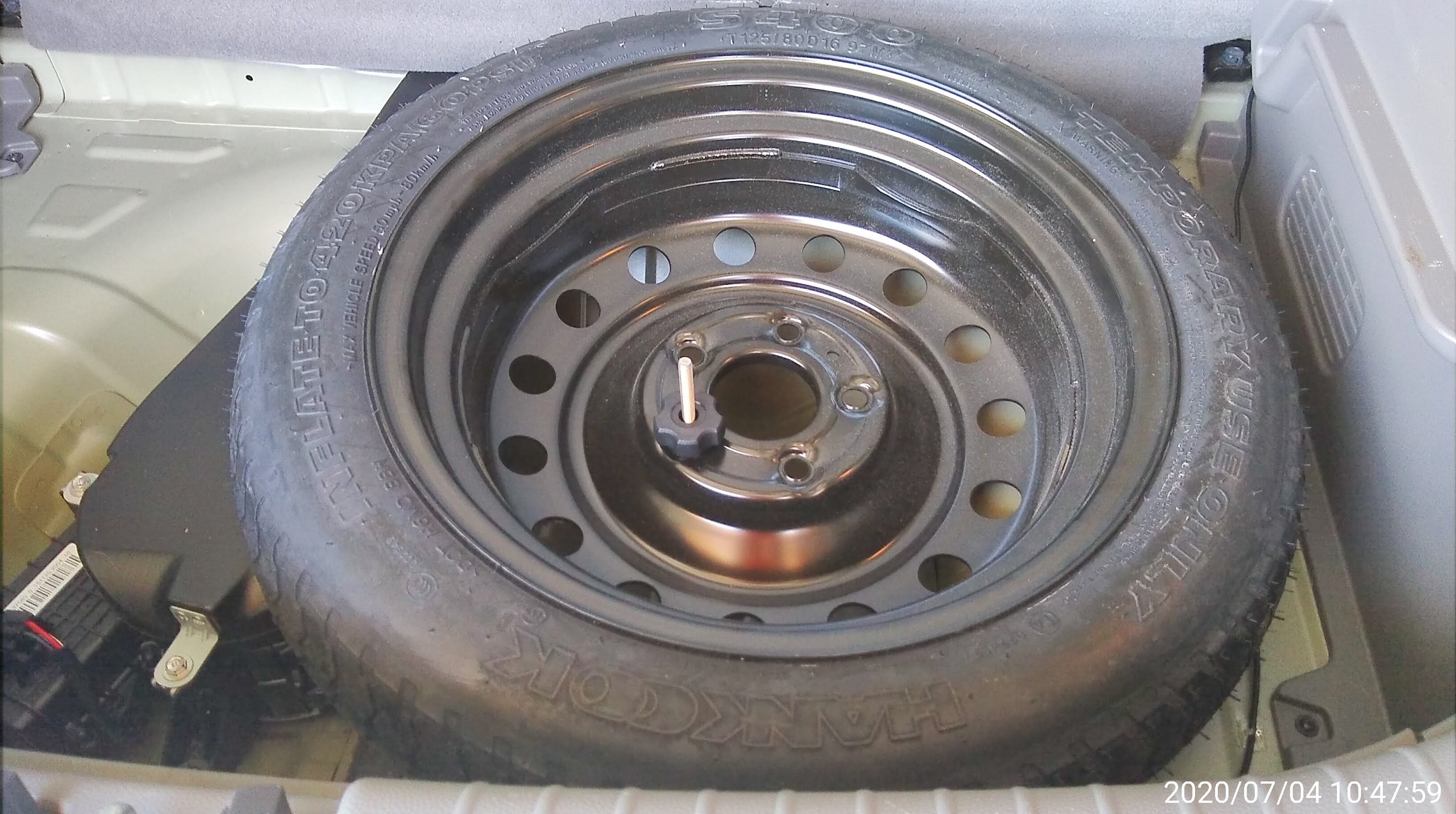 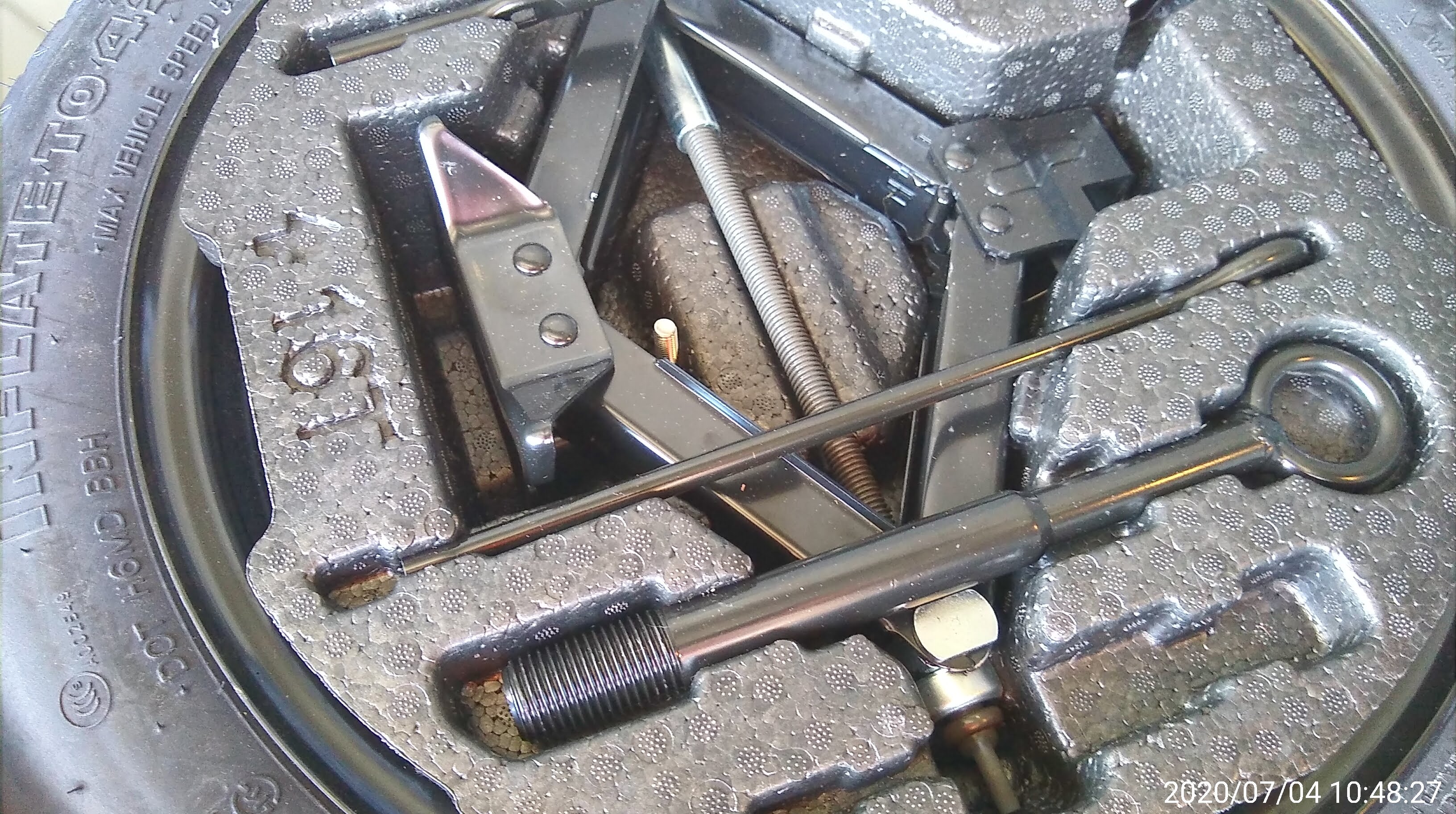 (You can see the top of the rod poking through) 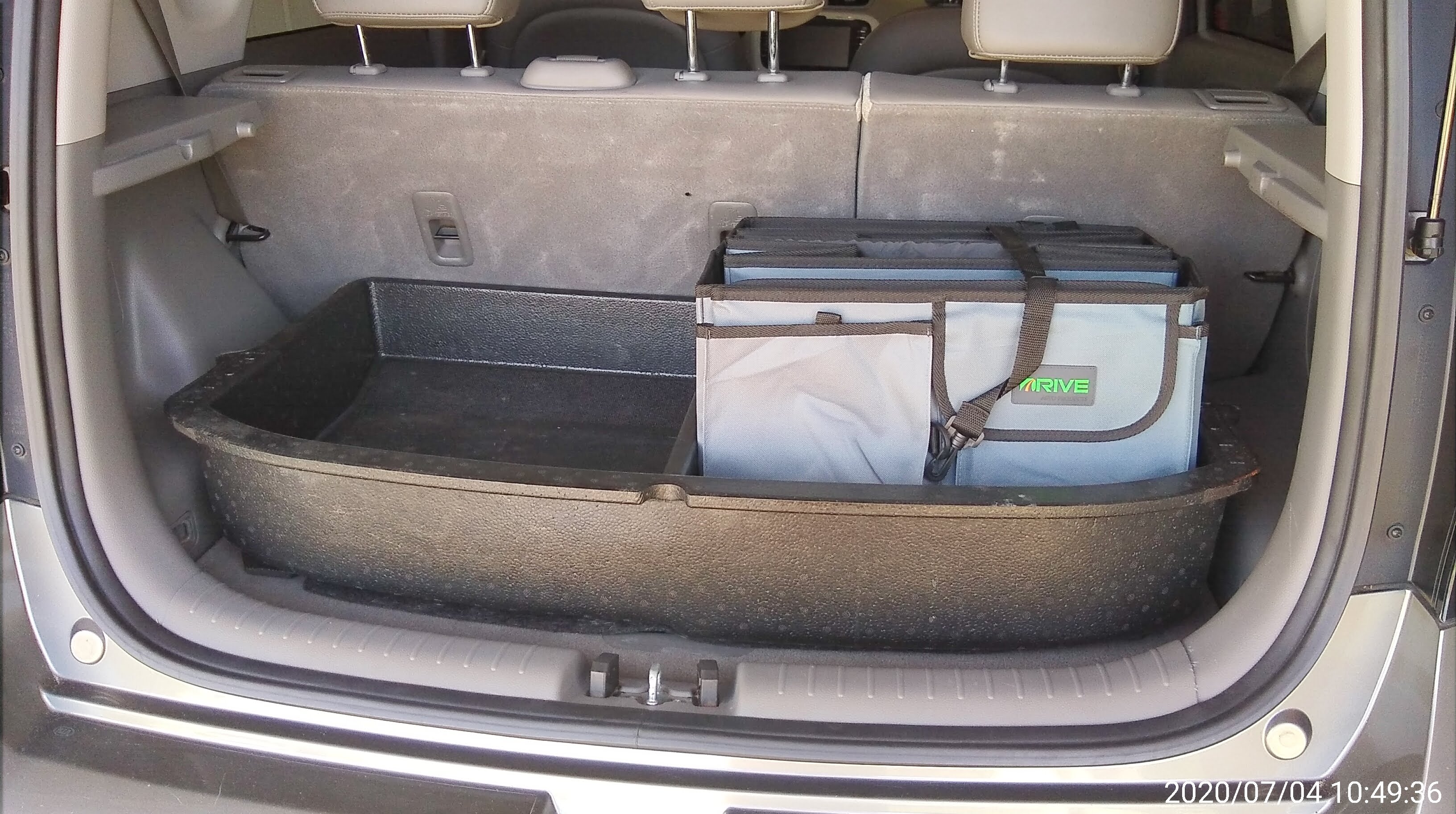 I now keep the organizer on top and it doesn't look too bad. Just for the sake of completeness, here's how the battery install worked out: 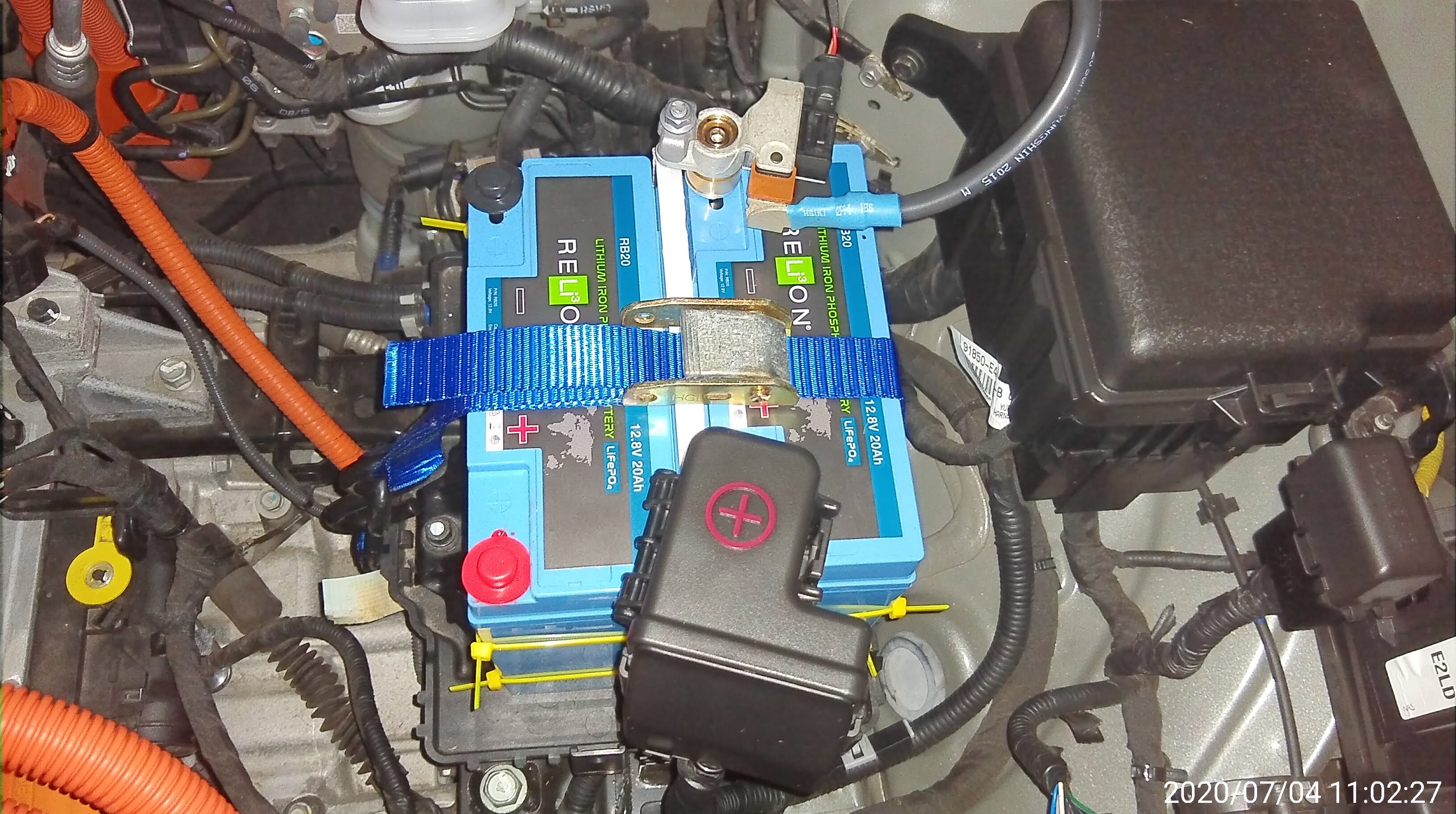 It's actually TWO of those RB20 batteries, but only one is connected. I'm using the other to fill the space since they are so much smaller than the one they are replacing (and only weigh about 5 pounds too!). Long story short: The first one they sent was fine but I had casually mentioned to them in my review that it shipped with some red paste on the positive terminal so they offered to ship a replacement but to keep the original (these batteries are not cheap, either!)

Have a good one.
Russell
Kissimmee, Florida USA

Thanks, that's very clear. I can get a 300mm or a 200mm, so I'll go for 300 and shorten it. The trick is to have a nut (all metal, not nyloc) already threaded on the shaft, before shortening. Then when you remove the nut, it straightens the distorted metal. Usually works.

Looks like you have a spare battery available now, in case the wired one goes flat, if you charge it occasionally.

Yeah, that's a good point about the nut. I wish I had bolt cutters because that would have worked well I think.

And it never hurts to have a spare battery. Nice thing is, a lithium will hold its charge up to 90% for a full year (at least these ones are claimed to). But it should last far longer than the stock one that came with the vehicle in any case. I even thought about connecting them in parallel so that it would be a 12V battery with twice the capacity, but that would be overkill...

The only "upgrade" I'm contemplating right now are seat covers, but I'd prefer to have ones specifically made for the vehicle rather than "universal" ones that tend to fit loose or just don't conform to the shape of the seats properly. Also, there's ventilation and airbags in the front seats, so that would need to be accommodated as well. I found a full car (both front seats and back 60/40 seats) set that is made specifically for this vehicle and is compatible with those features, but it is rather expensive: Almost $300US. It might be worth it though in the long run. Any ideas? The current seats are in new condition, but I want to keep them that way!
Russell
Kissimmee, Florida USA

Well, the original battery is 45 Ah, and two of yours in parallel only amount to 40Ah, so perhaps it's a good idea.

I plan to shorten the rod with an angle grinder, and remove any burrs with a flap wheel.

My view on seat covers is unconventional. I've never found one as comfortable as the original, so I don't fit covers, and just enjoy what I have. The next owner can fit covers if he finds the appearance unsatisfactory.

I think it's 45Ah only because that's what they had on hand (I believe the ICE variant uses the same battery), not because it needs to be necessarily. The person I got the idea from on YouTube has been using the same 20Ah battery in his Fiat 500e for over 2 years with no issues. And really, the 12V battery is really only needed to activate the relays for the main traction battery and to act as a sort of buffer for the 12V accessories. I still may connect them in parallel just for the heck of it though, since I have the extra.

I'm still contemplating the seat covers. If this wasn't in such great condition I would probably do the same as you say, but it's practically new and I'd hate to wear the seats out more than I need to. There are much less expensive ones out there and I may go that route even though they don't fit perfectly (but are still quite nice in some cases).
Russell
Kissimmee, Florida USA

I suppose the capacity would only matter if you run out of traction battery for whatever reason, and its night-time on an unlit road, etc, so yes, I'd parallel them.

The brake system runs on 12V, you can hear it pressuring when you open the driver's door. Yes, the high voltage traction battery will charge the 12V when the car is on, but I would be very wary of replacing the 12V with one that's smaller.

I thought the ICE Soul actually uses a slightly different 12V battery? i know that when I replaced mine I had to specify that it was for the Soul EV.

The brake system runs on the 12V system, but that system is powered by the high voltage system as long as the vehicle is on. It's like in an ICE car: Yes, if you're sitting parked with the engine off you can turn the headlights on and it will work because it's using power from the lead acid battery, but as soon as you turn the engine on you can actually remove the battery entirely from the vehicle and everything will still keep running (unless you have a bad alternator). In an EV it works in a similar way: When the vehicle is on all of the 12V accessories are powered by the DC-to-DC subsystem (480V->12V), using the battery as a sort of buffer.

The battery for the ICE version of the Soul is around 45, as is the one that came with the EV version if I remember correctly. Whether they are the exact same battery, I don't know. In any case, I'm not too worried about the 20Ah bit, as there are no high high cranking amps needed and the power requirements to engage the high voltage battery are fairly small. Plus, as I said, the YouTube guy has been using the same battery with his Fiat 500e electric vehicle for over 2 years with no issues and he's an auto mechanic who has torn down his battery pack and reassembled it (so I assume he knows a bit about electronics). I suppose if I needed to run just the headlights without a charged HV battery then, yeah, it would be nice to have 40Ah instead of 20. I still may connect them in parallel since my cost to do so would be minimal.

Thanks for the input everyone! Lots of things to consider.
Russell
Kissimmee, Florida USA

Okay, so I took everyone's advice and connected the two lithium 12 volts in parallel: 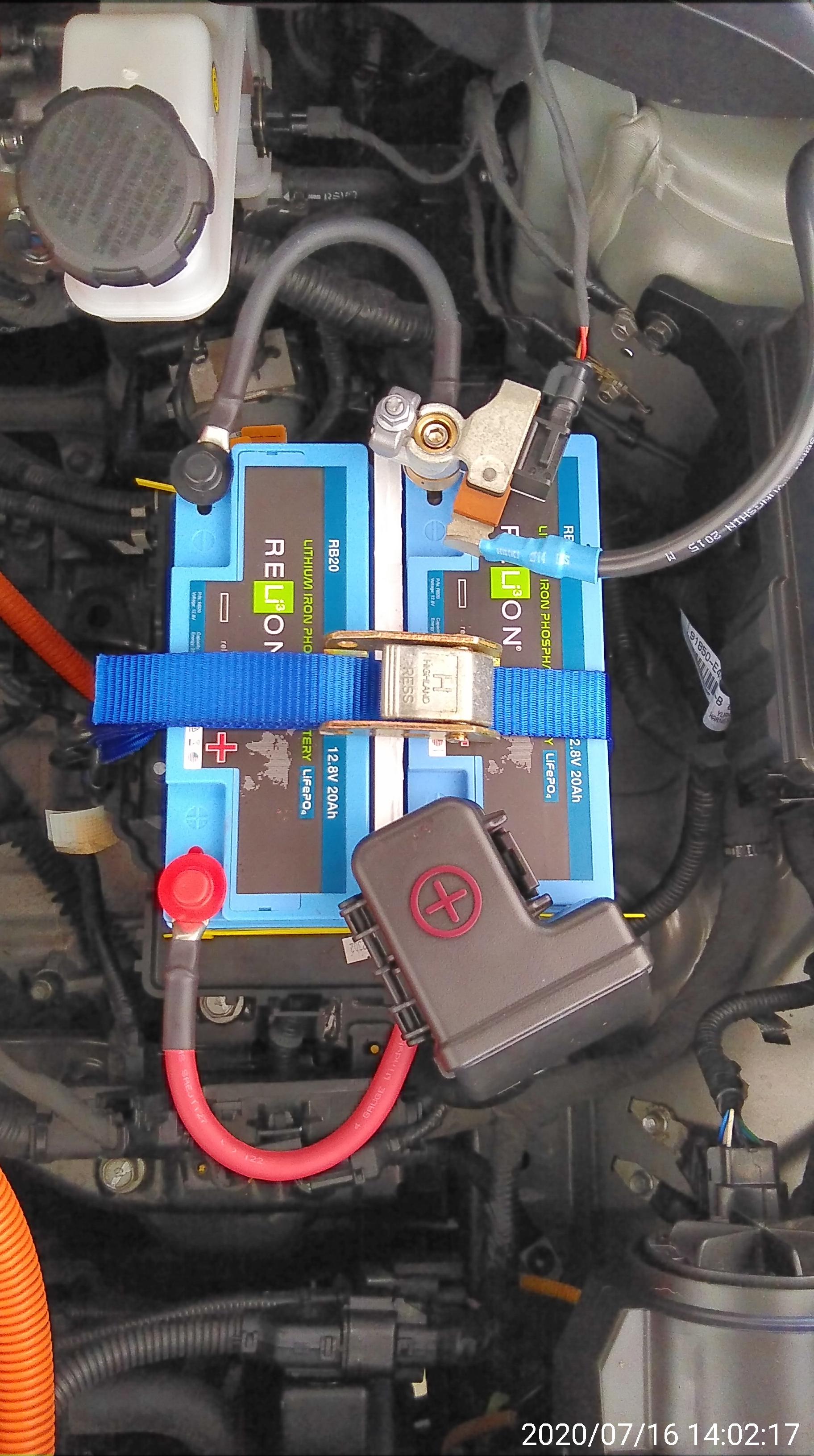 Now I have a 12V battery with 40Ah instead of only 20. I ordered the two short (9 inch) positive and negative cables on Amazon for about $10. I guess I have a little extra peace of mind now.