DrivingForce wrote:Sorry noob here, but how would I know if my heat pump were working? I have a 2016 + so it should have a heat pump.

You would notice the following when the heat is turned on, and while the energy monitor in the vehicle shows current energy consumption of the HVAC system > 0.00 KW

1) Radiator fan will be running
2) Some compressor noise should be evident
3) Silver coloured (aluminum portion) of the high pressure refrigerant discharge line from the compressor that runs through the firewall, near the brake fluid reservoir will be warm or hot to the touch

To this point, I have been 100% unsuccessful in my attempts to have kia (dealerships and kia Canada) address this problem. In fact, they refuse to even acknowledge there is a problem. Their position is that since hot air comes out of the vents when the heat is turned on, all is well! (pure nonsense). Sure.. the PTC works... but that isn't the problem! Now with the chilling temperatures here in Ontario, I have really started noticing the much higher draw of the PTC, and range is being impacted quite a bit, especially being stuck in GTA (Toronto) traffic.. this means having the heat on for a long time, which exaggerates the impact of a low efficiency heat source (the PTC vs heat pump).

At this time I am trying to have a dealership reverse the FATC software update that was done in September... but so far, zero luck (even though I am offering to pay for this out of pocket). They seem to be VERY unwilling and uninterested in dealing with this... and this is at two dealerships.

I really like (liked?) this little electric kia, but given my service experiences with this vehicle over the last 5 years, I can no longer recommend it to anyone I know. The terrible quality service I have received has been BY FAR the worst I have ever experienced, and I have a reasonable base upon which to draw that comparison.... Over close to the last THREE DECADES, I have owned many domestic (North American) and foreign vehicles (German and Japanese). The next closest in poor service and quality was General Motors, and even they at least acknowledged and resolved the defect in the vehicle, after only 2-3 attempts. That seemed pretty bad at the time, but compared to this, that was NOTHING.

I am quite concerned for the others that have purchased a vehicle from kia as a result of my recommendation and demonstration of the car. Before this, I was quite an advocate, but now I can only hope they fare better than I.

My apologies for the rant, but I am very frustrated by this series of experiences and interactions with kia... their behaviour is more in line with what I might have expected from a shady used car lot - certainly not from an international auto manufacturer. I am still considering how to proceed all things considered, and have a few options going forward, but ideally they'd just fix the car!

I don't know how things go in Canada, but on this side of the pond, we find a solicitors letter can be quite effective.

Another possibility is an independent engineer's report, quoting chapter and verse from KIA's own literature on how the heat pump should run I don't know where to get that).

Thank you for the explanation. I only paid about $14k US for mine so I have low expectations. I suspect my heat pump is not working and I have not noticed any compressor sounds. I will try feeling the refrigerant line when the heat is on. I have a warranty for perhaps 13 or 14 more months.

I took a quick video to get the sound of the heat pump running at -2 deg C with two different heat settings. I have not yet had the software update.

Goochj wrote:I took a quick video to get the sound of the heat pump running at -2 deg C with two different heat settings. I have not yet had the software update.

Thanks for doing that... Yup, I can confirm mine does NOT do this anymore (that's how it worked before kia 'fixed it')

To the poster that mentioned a solicitor's letter, I have considered and looked into that, but that does cost money (not a small amount at least around here), with no guarantee of outcome. Still may go that route.. Will see. Maybe kia will read this forum and suddenly decide to do the right thing and fix the car!

I do recall hearing a noise like that when I first got the car. Then I took it in for a recall and they updated the BMS. I haven't heard the noise since.

Thanks for posting those videos. Since my AC compressor had no refrigerant until this summer I had never heard the compressor before then. Thought mine must be on the way out given the blaring noise it generates, but nope, I guess that is normal. lol. Too bad they couldn't use a quieter compressor on an otherwise quiet car.

Anyway, I heard my compressor running the other day while driving with the heat on, so I guess the heat pump was engaged at that point. 2016 with the latest sw installed. I'll try to to record the circumstances when I hear it in the future for reference.

DrivingForce wrote:I do recall hearing a noise like that when I first got the car. Then I took it in for a recall and they updated the BMS. I haven't heard the noise since.

Correction, i just verified that my heat pump is indeed working.

-
GoochJ - thanks for the 2 videos. I have never heard that sound before. But today I opened up the hood and checked. Yes it clicks.
I have a 2015 with the original BMS software.
(Am puzzled why I didn't hear this sound a few weeks ago when I checked that the pipe was warm. Amazing what you can hear when you know what you are listening for.)

With the heating on and the ambient temperature 12C I see this. 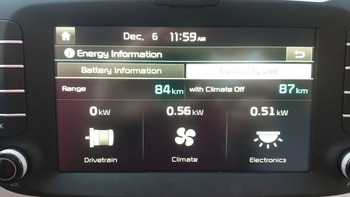 Looking at Torque with the heating on I see 449.5W. It fluctuates but is slightly lower than the reading in the car.
It went down to about 290W when I turned the heating off. 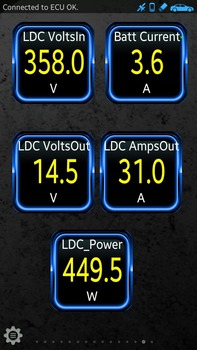 Here's a diagram of the heat pump system. It is the compressor that pumps the refrigerant gas / liquid around the system. 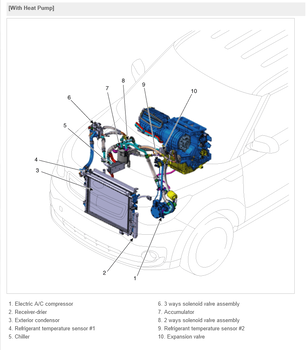 I have a suggestion to make. I think the HVAC software has some "unwanted features". I have noticed that it doesn't always do what it should when I press buttons, and I have got it to behave, eventually, by pressing the AUTO button several times. Why that should be, I have no idea. Anyway, the suggestion is to try pressing the AUTO button multiple times, to see whether the heat pump responds.

Could be a cheap fix