What is the total capacity of the MY2018 battery.

What is the total capacity of the MY2018 battery.

-
The new 30kWh version of the Soul EV has been out for a year now.
The stated capacity is usable capacity. The total capacity has never been officially announced.
Can we now find it using our Torque battery data, or at least disprove some of the speculations. 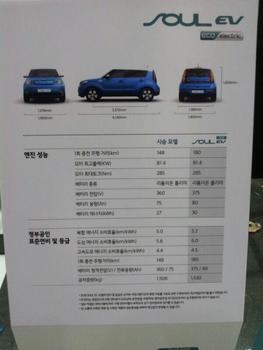 Note: Kia has officially stated that 4 cell pairs were added to increase the number of cell pairs from 96 to 100.
This is not in dispute here. Although this fact could be disputed because Torque shows voltages for 3 more cell pairs than this.
Those extra 3 voltages could just be Min, Max and average voltages.

One guess is 31.8 kWh by contributors to - Wikipedia: Kia Soul EV
They make the guess that Kia 'improved' the usable window of cell capacity from 37,5 Ah to 40 Ah out of 42,36 Ah.
In other words the cells are identical, but now the BMS software opens up more of the total capacity to be used.
As far as I know this is only guesswork, unless someone can link to something to show how they made this statement.
And please don't refer to the site they actually link to. kia-world.net is not useful.
'Improved' here means removing / reducing the hidden safety buffer at the top, so these cars will show much faster degradation in the first two years.
On older cars that degradation is hidden from the user, because the buffer is lost first before any usable capacity.

The actual increase in usable battery energy capacity seems to be 11% (from 27kWh to 30kWh)
This is achieved by
Increasing the number of cells by 4% (from 196 to 200)
Improving the cell capacity by 7% (from 75Ah to 80Ah)
The nominal voltage of the battery has increased because there are more cells in series. (from 360V = 3.75V * 96 to 375V = 3.75V * 100)
....
Hence in Korea the driving distance on one charge has increased from 148km to 180km. (A 22% gain) This is in part due to a bigger battery , part due to improved driving and charging efficiency at higher voltages , and partly by removing the 80% charge limit. The car weighs more because of the larger battery which reduces efficiency.

In the USA the EPA figure will become 111 miles. 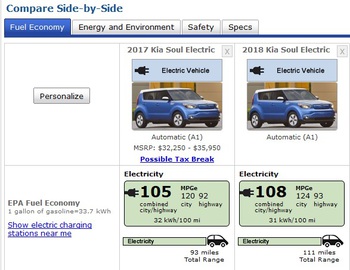 My guess on total capacity was

My guess was the cell chemistry slightly changed in these cells.
Originally they used 37.5Ah out of 42.5Ah
Now they use 40Ah out of 45Ah
My guess was made based on the fact that the battery pack weight increased by 13kg. Each cell only weighs just under 1kg, so something else is slightly different if they only added 8 cells.

Given that the latest Hyundai I oniq has just had a software tweak to the BMS that increases range from 191km to 200km, I am now assuming that Kia may well have done the same and my first guess was wrong.
So. Can we disprove one of the possibilities using Torque data? The pack voltage at top and bottom should give a clue.

The cell voltages when the cars are fully charged is the same.
Hence I don't think they have widened the depth of discharge.
Last edited by JejuSoul on Fri Jun 01, 2018 10:07 pm, edited 1 time in total.
The codes for using Torque Pro can be found by clicking the link in the website icon under my user name on the left.

-
This thread is really for those who understand that the usable capacity of the 30kWh Soul EV is 30kWh, and for then trying to guess the total capacity.

But there are still many who don't know that the 30kWh is the usable capacity.
For example - PushEVs : 2018 Kia Soul EV confirmed to be more efficient

Last edited by JejuSoul on Thu Jun 21, 2018 9:29 pm, edited 2 times in total.
The codes for using Torque Pro can be found by clicking the link in the website icon under my user name on the left.

My charging capacity is variable but my 2018 has registered 147 miles ona full charge.

What is the indicated miles/kWh when you see those ranges? I don't see how people can get those ranges. Do those with high GOM ranges only drive 35mph? Mine shows around 109 miles but I have either a bunch of stop & go with hill climbing or I have a significant portion of the drive at 60mph.
David D. Nelson

We still have very little data on the 2018 Soul EV.
No knowledge of the total battery capacity, nor any degradation data.

This is not a significant difference.

-
The codes for using Torque Pro can be found by clicking the link in the website icon under my user name on the left.
Post Reply
Load more posts
5 posts • Page 1 of 1