As promised, here is the Torque info from the new battery pack: Regardless, I will do a drain/range test to see if 29.7 kWh is actually usable. Let's calculate the kWh actually used/recharged on the car's end:

-
Hi Kish. Thanks for posting the data. All looks good. It is the total energy that you can put into, and get out of the pack that confirms the usable capacity in your battery is 27kWh. This is the same as a brand new 2015 Soul EV. Hence you do not have a newer 2018 battery pack with 30kWh usable capacity.

The torque data showing zero deterioration may or may not be accurate. A BMS reset would set this to zero, just like the real zero on a brand new pack.

Please keep reporting it will be interesting to have more data on this pack.

I will answer the questions about the Torque display showing 110% on the Torque thread. - Setting up Torque to show BMS data

There's an interesting article by a Leaf owner about his battery replacement here (click to download a pdf file) - http://bit.ly/2A2tJDc
The codes for using Torque Pro can be found by clicking the link in the website icon under my user name on the left.

Ah yes, I didn't at all consider the fact that the Torque PIDs for SOH could be providing the wrong info, since you guys are calculating this from the deterioration numbers from the BMS. Thus showing 110% instead of 100% SOH. Now that you mention it, it's definitely a similar effect to the usual BMS reset that the dealership does.

I also agree that scenario #4 is unlikely, because the 30 kWh usable Soul EV's wasn't available in the U.S. until recently, in the MY 2018. Thus it doesn't make sense for Kia to "waste" one of those newer battery packs in an older model 2015. Scenario #1-3 is likely, with #2 or #3 most likely. I will surely be reporting SOH readings as time passes. Let me know if there's other PID values you're interested in.
2015 Soul EV+ | 55k miles
2017 Bolt EV Premier | 90k miles

I DCFC'd my car for the first time today with the new battery pack. Three new pieces of information to report:

The 2015 Soul EVs are software-coded to stop charging at 84%, and we could manually initiate a 2nd charge which will bring it up to 94%, after then it will stop again. This behavior is also clearly mentioned in the 2015 Soul EV user manual. I verified this behavior multiple times with my previous (original?) battery pack, and it always stopped DCFC'ing at 84%.

I know that 2016+ Kia Soul EVs removed this original limitation of stopping at 84% and only stopped once charge has reached 94%. This could potentially mean that this new battery pack replacement that I've received was originally intended to go into a 2016+ Soul EV. Either that, or the new BMS that was installed is again from a 2016+ Soul EV so it was software coded to stop at 94% instead of 84%. (or both!) The Torque reading above was directly after the 4th DCFC. You can see that the battery inlet temp (cabin temp) is at 78.8F, but the battery temp is at 122F, quite hot! I had the car turned off during the DCFC sessions, so the A/C was not running to help cool the cabin/battery. The battery cooling fan was pretty much spinning at full speed (95%?).

3) After the 4th DCFC session, I also noticed while driving on the highway that the throttle response wasn't that good. I quickly checked Torque and noticed that the motor output power is being limited to 63 kW! The Torque reading above shows that both the motor output power and regen have both been limited to 63 kW. I'm assuming the BMS is doing this to protect the battery since it's so hot? Later in the day when I allowed the car to sit for a few hours, the battery temp had dropped down to 100F and the motor output power was back up to 90 kW. The ambient temp by this time was down to low - mid 60s.
2015 Soul EV+ | 55k miles
2017 Bolt EV Premier | 90k miles

-
I have a 2015 Soul EV with the original BMS software, but updated OBC firmware. It quick charges to 83%. The blue lights do not come on.
There is much confusion about the BMS update - BMS software update
The BMS software update is known as Service Action 297
Some people say it now quick charges to 94% in one session, some say it remains the same. Some people say the blue lights do come on.
Some people think that resetting the BMS magically increases battery capacity.
Perhaps this new firmware has a new algorithm for calculating SOH? Perhaps not? 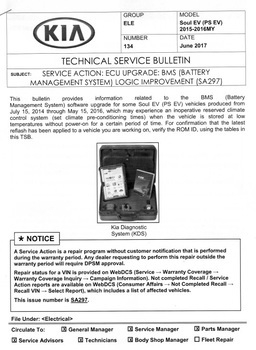 Maybe there is more than one update available, or maybe it depends on a combination of upgrades. Anyway during the battery replacement many of the ECUs in your car must have been upgraded. Without knowing all the ROM IDs it would be hard to know exactly.

The previous known values for Fan Status, Fan Feedback and the temps at which they come on are

We can now add level 8. Your car has the hottest battery so far recorded!
We can see that at 50C the fan speed is level 8.

In the Torque screenshot what are the 3 PID codes that are not found? Which Torque dashboard are you using?
The codes for using Torque Pro can be found by clicking the link in the website icon under my user name on the left.

Ah, I figured something out!

I noticed that Torque "charge power" reading always stayed at 0.0 kW (as well as charge volts/amps/output volts). Even during DCFC sessions, these values stayed at 0.0. Then today, while charging at level 2 AC, I was watching it and noticed that "charge amps" was going to 360 A or so, which is totally incorrect. So I figured this must have been switched with the voltage readings. Indeed I downloaded and swapped to the Kia_Soul_EV_OBC2016_data instead of the 2015 one I had previously installed and it worked! Now I'm getting correct readings for level 2 AC at 6.7 kW (as well as proper readings for amps/volts). This is a confirmation that indeed that the new BMS they installed must have been a 2016+ version, which in conjunction with new OBC firmware also explains why my DCFC session ends at 94%? By the way, my 3 blue lights on the dash does stay on while DCFC'ing.

As far as the dash I'm using, I thought it was pemessier_1080x1920_xxhdpi.dash, but looks like mine is slightly different. The layout and the values are identical, but some of the labels are different. Regardless, I loaded in the pemessier dash and the 3 missing PIDs are still not available. I also cleared and reloaded all 8 relevant PID files. What's supposed to be in those boxes?

Some piece of bad news. To quote you from before:

JejuSoul
According to the lab data 45C (113F) is the threshold when major deterioration starts to occur. I also wonder if yours is a one off, maybe the fan etc in the boot is faulty, air flow restricted etc?
Keith Alexander, Shropshire UK

Kish wrote:Some piece of bad news. To quote you from before:

According to the lab data 45C (113F) is the threshold when major deterioration starts to occur.