Failure and repair of onboard charger (AC/DC)

Failure and repair of onboard charger (AC/DC)

In our Kia Soul EV problems with charging started some time ago. There were problems to charge fully with 230V AC charger, and battery started surprisingly to be inbalanced. After some months charger broke totally.
After connecting plug, lamps blink and repeatable clicking was hearable under the hood.
We decided to repair charger (some parts boiled) and updated software to V12 (we have cloned it from other Kia, where charger was replaced at dealers', after similar failure.
And now we have shitty 22A limit (former was 28A).
I try to find it in control program, but they differ a lot.

I will inform you about results.

-
Interesting to see your repair. Your car has Polish number plates, so I assume you are in Europe.
But your car has an American OBC, so presumably this car is an import from the USA.
( I am amazed it is cheaper to transport used cars from the USA, rather than just buy used from Germany. But as we have seen in the Jordan thread that is the reality.)

We have always assumed that the main difference between the American and European OBCs was that Europe uses a higher domestic voltage 220V/240V than elsewhere 110V. But what the difference may be is not obvious, and cannot be seen by owners.
What we did see is that the European OBCs were always software limited by about 10% under the stated 6.6kW output.
American cars in 2014 and 2015 did not have this restriction.
As the original OBCs failed, or cars were called in for the OBC software update almost all cars now have the software limit.

How do you read the version numbers on the OBC firmware?

What I have seen is the ROM ID.
Here's the display from Kia's KDS tablet showing the original (top) and latest ROM ID (bottom). 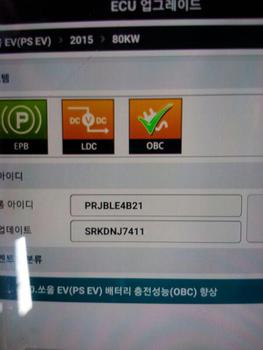 To be honest I'm not an expert of all generations/versions of AC/DC charger in Kia, as for me it was just a piece of electronics.
I have compared one working from EU Kia and one failed (but not rapidly failed, rather slowly dying, causing charge fails, etc, until final death). That one is as you have found from US.
I have read firmware from both controllers via JTAG port. Controllers are same, processor used is SPC5643LF from Freescale Semiconductor, in LQFP144 form. Then - I have disassembled both to find limits and change them in future (we will accelerate charger just to stress test our upgrade we do for it - we would set it to 10kW with some critical parts upgraded. Customer has few these Kia's imported from USA, and some have failed, or failing chargers.
Possible, that we will leave these Kia's with 10kW charging speed with our 2-phase charger (as then they will have 5kW load per phase, so maybe drivers (these cars are for Eco-Taxi network) may charge at home, if they have 20A-25A per phase fuses.
BTW, Fiat 500e cars will be more interesting to have accelerated chargers to 10kW, as they have no ChaDeMo port. Only Type1.
Actual failure of these Kia chargers is simple (I assume they all die and suffer from same problem) - underestimated local temperature of some power elements. We have replaced all them to 30% more capable and improved whole cooling, adding one copper heat pipe to these, which are not in contact with glycol cooled surface.
Now I have 3 x Fiat 500e and one Mitsubishi i-MiEV waiting for service with similar failure, I think they may have same problem.

Hello, I'm New in the Kia EV familly, my genuine OBC is dead, but I found one the same from another Kia Car with same part number. The qestion is, is I neet to learn this OBC module with some software to the car or he are just plug and play ? Thank you in advance to all.
Post Reply
4 posts • Page 1 of 1