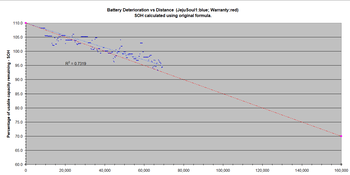 
...The battery capacities (102 kWh and 156 kWh) of these electric buses are smaller than that of electric buses (200 kWh) that have come out on the market recently. As a result, these buses drive for 320 km on average daily while traveling back and forth from Jungmun-dong and Namwon-eup and they need to be recharged for every 70 to 80 km. This indicates that these buses have gone through 4,500 to 5,000 charges and discharges that are 1.5 times more than the number of charges and discharges that the industry guarantees which is at 3,000..

I'm really curious if there's any theories to why the rate of replacement is so high in these compared to the Nissan LEAF despite the active air battery cooling design vs the LEAF's passive design? I know the chemistry is different, but any chance there was just a defect in manufacturing that dooms these batteries, or what's going on? I'm really hoping that the replacement battery holds up better than the original..
Post Reply
496 posts