Do the 2016 models have active air cooled batteries? I thought the air cooling fan in the trunk well only appeared in 2017-2018?

IanL wrote:Do the 2016 models have active air cooled batteries? I thought the air cooling fan in the trunk well only appeared in 2017-2018?

The Soul EV battery is made by SK Innovation. The Ioniq Electric battery by LG Chem.
Does this mean that before 2017 LG Chem had better battery tech than SK Innovation.
We don't have enough data to compare the newer cars yet.
-

The Ioniq Electric battery of the 28 kWh has more Cobalt percentage, that is why these do not degrade as much.
The 38 kWh model has a different chemistry, with less cobalt.

Here a good overview which EV's use which chemistry.

EDIT: This article suggests to wait for high nickel batteries, like NMCA.

And here is another great article comparing LFP (Tesla in China) and NCMA: battle of the batteries cost versus performance
Last edited by ZuinigeRijder on Sun Jul 26, 2020 6:28 am, edited 3 times in total.

Excellent summary ZuinigeRijder - the sort of reading a nerd like me likes!

It's amazing to see the progress happening in the EV sector, I can only imagine where we'll be in the next 5-10 years.

ZuinigeRijder wrote:...The Ioniq Electric battery of the 28 kWh has more Cobalt percentage, that is why these do not degrade as much. The 38 kWh model has a different chemistry, with less cobalt..

PushEVs wrote:I’ve never seen official battery specs of the Hyundai IONIQ Electric where the battery chemistry is stated, therefore I can only speculate on it by looking at its characteristics.
–
I think it can be a NCM 622 cathode (with improved electrolyte for better thermal stability) or – more likely – a NCM 523 (less nickel and more manganese). The more I think about it, I think it’s the last option.
–
“LG Chem has also developed the LiNi0.5Co0.2Mn0.3O2 (NCM 523) material, which has some adjustments to the compositions that make NCM.”
–
http://www.sneresearch.com/_new/eng/sub ... &sub_cat=2

Whatever it is, this chemistry seems to offer better power density and better longevity than ours. Overall I think the 28 kWh Ioniq Electric has a better battery than ours. And also better than the newer 38kWh Ioniq Electric. The reason is obvious. Cobalt is an expensive ingredient, and all manufacturers are trying to reduce the Cobalt content.

The cells in the 64kWh Kona Electric are made by LG Chem and use a cathode chemistry known as NMC 622.
I believe the 38kWh Ioniq Electric battery uses the same NMC 622 cells from LG Chem.
The same manufacturing defect that seems to be occasionally impacting the 64kWh Kona Electric also seems to be impacting the 38kWh Ioniq Electric. see Battery usable Capacity and Safety Margins (Buffers)

JejuSoul wrote:...The Kona 64kWh Electric has a battery by LG Chem.
There seems to be a common fault in the Kona 64kWh Electric where a single cell failure causes a big drop in range.
This happens to new cars with low mileage, so I assume this is a manufacturing defect not deterioration....

The new 38kWh Ioniq Electrics use the same LG Chem cells.
There have also been reports of cell faults. - Battery usable Capacity and Safety Margins (Buffers)

Here is the battery data for a car at 100% SOC. We can see that cell 32 is much lower voltage than the rest.

In a car with a badly degraded cell the voltage of the bad cell will be much higher than the rest while charging and much lower when driving.
Hence this backs up my previous assertion that this is a manufacturing defect not deterioration.

-
For a comparison of how the failure rate of the batteries in our cars compare to the Nissan Leaf, I suggest looking at this thread.
Battery Upgrades are very possible

mux wrote:Nothing beats the Leaf in speed of degradation. As far as we know, they're the worst, not because of chemistry (see the last paragraph) but because of the BMS/thermals.

The main reasons I would suggest that our battery is doing better are also 'not because of chemistry'.
1/ Kia doesn't sell EVs in Arizona. Both cars die quickly when parked in the heat.
2/ Most Soul EVs are sold in Norway. Both cars survive well in a cooler climate.

The Soul EV has a much longer warranty than the Leaf, so we are getting free replacements, whereas they now have an active independent list of repair shops.

I'm going to push back (just a little) on the "cars die quickly in the AZ heat" type statements. I think it's fair to a point, but I think these cars can run just fine in AZ with proper/typical EV habits. I know there's a long list of failures in AZ, but what I haven't seen is how those cars were treated daily for years (scientific method and all). I bought a used 2015 last Nov that had just had a new battery put in (45k miles). It's now 10 months later and I have zero battery degradation still per ODB2 reader (110 SOH). Sure in the extreme heat the GOM claims less battery efficiency, but I'm still getting 90 realistically in the triple digit summer the few times I've driven it to near empty (rarely). I imagine the above statement might be true with bad charging/managing/driving habits compounding over time. But below are the rules I follow and I think they're the key to keeping it working well in AZ. Some of them are also just standard best practice EV rules.

[*]It sits outside in the heat (no garage room), but is always plugged into L2 with rare exception. This kicks on the venting fan regularly to get some heat out. I still recommend storing it under cover/in a garage if you can.
[*]Having it plugged in regularly also allows me to auto-condition the car in the hotter parts of the day. This kicks on the AC which in turn sends that cool (or warm in winter) air down into the battery cavity as designed (it's scheduled twice daily, I don't use it in the morning I can manually do that).
[*]I only charge to 80% unless I know I have a lot of driving to do the next day.
[*]I've only used the L3 charging twice, just to see how it works and as a test. No EV is meant to be charged via L3 constantly.
[*]I don't go 80 on the freeway all day, this car isn't optimized for that. I just do the speed limit and go over if I need to. I know one of the guys with a failed battery claimed he went 80+ on the freeway all the time, which probably cooked it. I did it once to test the temps via ODB2 and man did it get hot!
[*]I think I've only ever had it get below 20% maybe three times. I just don't usually need to drive it that much per day.

Now fair enough that might seem like a laundry list, but it's all in the recommended list from Kia. And some may say well I don't want to do those things. Fair enough, get a different car and have what you need for your lifestyle. But for those that know the Kia Soul EV is awesome and want it, you can make it work if you can follow the best practice list. I have two Tesla's and still enjoy the Soul for some weird reason. I think it's the upright seating, Android Auto, and cargo space. 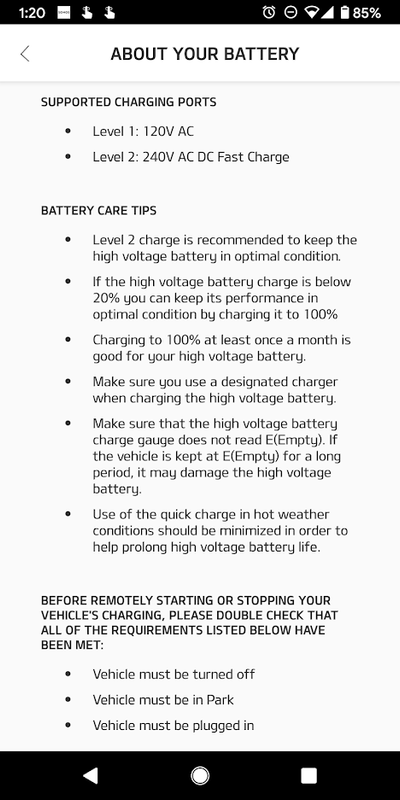 Not trying to push back on what you've said, but if you rarely (if ever) run your battery down low and then charging it back to full - your BMS isn't calibrating itself therefor I suspect your 110% SoH isn't an actual number to be trusted. Everything you'll listed suggests this.

Well crap I just hit post and it took so long to write it out per work distractions that I timed out and lost it all. So I'll just skip all the scientific method stuff and say I have calibrated it a few times, the most recent of which is two tests last week. The intent of the test was to ignore the GOM and get real world values at two different freeway speeds as well as use ODB2 to check the battery temp difference between them. Spoiler, the battery temps at a constant 75-80 were much higher and I could see that wrecking the battery more. Anyway, I always reset trip A for every drive after a charge so that I can observe the GOM bluffing. And going just by miles driven plus range remaining till it gets low, I'm still getting 90+ in extreme heat, and expect to be back at 110 when it cools down again. My overall point I guess is since I essentially started with a new battery + EV knowledge, it's enabled me to manage and monitor actual degradation in the heat. I'm not saying "no issues ever for anyone", just trying to provide another data point after 10 months in AZ.