-
This post will give details on the NMC 622 cells currently being used in the Chevy B olt and 40kWh Nissan L eaf. NMC 622 has a higher energy density than previous chemistries. One problem though seems to be the higher energy density of the cathode, does not allow for a similar increase in charging power because of limitations in the anode.

Update: this also seems to be the cell used in the new K ona EV.

Using info from this article - Jaguar and Chevy have LG in common we can find the stats for the B olt EV cells. 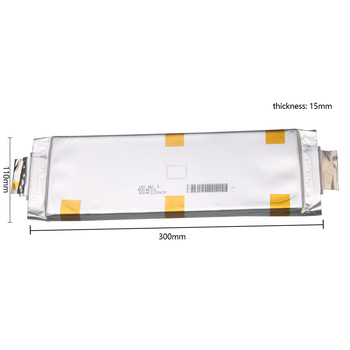 Having the exact size, weight and capacity of this cell will allow us to compare this current generation cell with the soon to be released NCM811 cell.

This cell appears to be the same one used in the Chevy B olt EV. - see Inside the factory building GM's game-changing Bolt EV 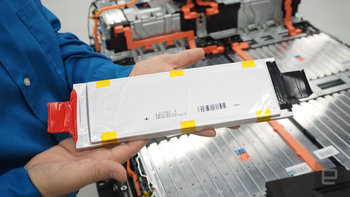 Renim wrote:...
increase in range capacity comes with a decrease in max charge rate.
...
the core reason is that the anode powder (carbon) has a strong inverse relationship between charge rate and safety (plating)
...

Last edited by JejuSoul on Thu Jul 12, 2018 9:43 am, edited 2 times in total.
The codes for using Torque Pro can be found by clicking the link in the website icon under my user name on the left.

-
At the recent EVTrend Motor Show in Seoul LG Chem displayed these 4 cells.
They didn't say what the last 3 are used for, but from the label color on the cell, the distance it travels and where it was made I have made the following guesses.
1/ Hyundai I oniq - Made in Korea.
2/ Chevrolt B olt - Made in Korea. - yellow sticker
3/ Jaguar I-P ace - Made in Korea ? Poland ?. - green sticker and power tabs offset.
4/ ??? Hyundai K ona or Audi E-T ron 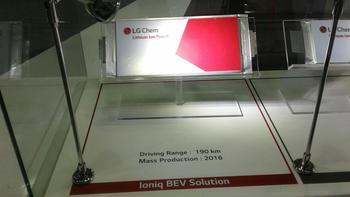 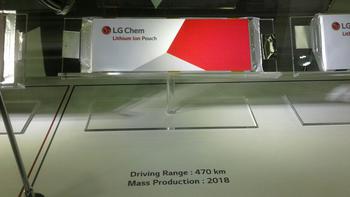 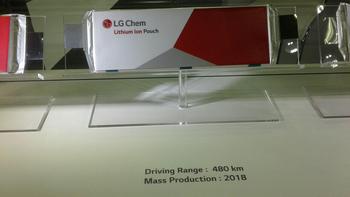 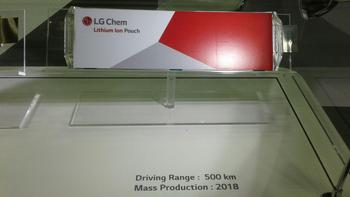 I believe 2,3,and 4 are all the same dimensions and are all 60Ah, but presumably the chemistry is slightly different.
These 3 are all are the NMC622 chemistry, LG Chem has yet to start NMC811.

The battery in our Kia Soul EV is also probably NCM 622. It has never been confirmed but this article SK Innovation rolls out advanced batteries states : 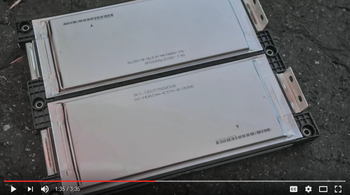 SK Innovation was the first in the world to succeed in the commercial production of advanced NCM 622 batteries. 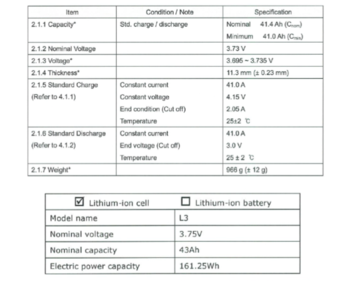 -
Reading through this thread again I want to make a guess about SK Innovation's naming scheme for their cells.

I think. (speculation for now - will add details as I find them)

E250 cell is a 25Ah cell. Perhaps this is the cell used in the Kia Ray EV. It is LMO / NMC. But the Ray EV uses 50Ah cells. I was hoping that they might be cell pairs.

Cell production for this new cell began in Feb 2016, more than a year before the 30kWh version of the car was released.

...A film separator made of a polyethylene (PE) material and having a thickness of 25 μm was stacked between the prepared electrodes, and a cell was configured using a pouch having a size of 8 mm×270 mm×185 mm (thickness×length×width), followed by injection of the non-aqueous electrolyte, thereby manufacturing a 25Ah-class lithium secondary battery for an electric vehicle (EV).

Performance of the 25Ah-class battery for an electric vehicle (EV) manufactured as described above was evaluated as follows. Evaluation items are as follows...

A research paper discussing the Ray EV battery temperature dynamics here -
Battery Pack Temperature Estimation Model for EVs and Its Semi-transient Case Study
It states the Ray EV battery cell as 50Ah, 3.7V
We know the Ray EV has 88 cells in 12 modules. 50Ah * 3.7V * 88 cells = 16.28kWh
But it could be there are 88 cell pairs where each cell is 25Ah

There's a really good report on NMC811 here - What do we know about next-generation NMC 811 cathode?
Last edited by JejuSoul on Tue Feb 18, 2020 7:36 am, edited 1 time in total.
The codes for using Torque Pro can be found by clicking the link in the website icon under my user name on the left.

-
I now have some circumstantial evidence to back up this speculation -

Battery replacements for the first generation Kia Soul EVs are being done with second generation cells. There is about a 10% increase in energy capacity. Replacement packs have the same number of cells, in the same layout. Same physical size.

Shouldn't really be a surprise to see a 10% increase in performance with a chemistry that is 2 years newer.
I assume all these cells will be NMC622.
I have no idea yet if the life expectancy of these newer cells will be more / less / similar to the first gen.
The codes for using Torque Pro can be found by clicking the link in the website icon under my user name on the left.

-
Have found a couple of new pics showing the latest battery cells for both LG Chem and SK Innovation.

SK Innovation now seems to have an E600 cell. Presumably this is the 60Ah cell used in the N iro EV and 2020 Soul EV. 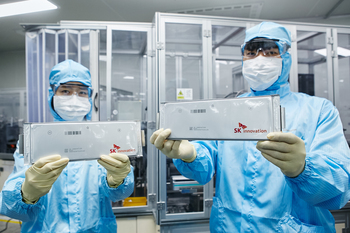 LG Chem's latest cell is called the E63. This is advertised on ailibaba as a 63Ah cell. 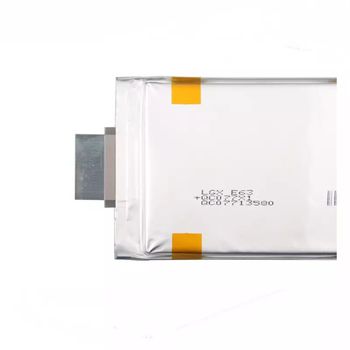 The codes for using Torque Pro can be found by clicking the link in the website icon under my user name on the left.
Post Reply
Load more posts
15 posts