There's some info about what NCM 811 is here - SK Innovation to begin production of NCM-811 batteries
The codes for using Torque Pro can be found by clicking the link in the website icon under my user name on the left.

The big news is the new plant in Hungary -

The facility in Hungary will add 7.5 gigawatt-hours’ worth of batteries to SK Innovation’s yearly battery production volume.

These are the cells for the M ercedes new EQ series of EVs. It's enough for about 100,000 cars annually. Only 20% of T esla's volume, but M ercedes is coming from nothing. It means pretty much all the production from the Korean plant will be used by Kia, mostly the new N iro EV.

Right now, SK Innovation runs six production lines at its plant in Seosan, South Chungcheong, where it can manufacture as much as 3.9 gigawatt-hours’ worth of batteries per year. A spokesperson explained that the company will build a seventh production line by the second half of next year to expand the capacity to 4.7 gigawatt-hours per year.

Last edited by JejuSoul on Wed May 09, 2018 6:13 am, edited 1 time in total.
The codes for using Torque Pro can be found by clicking the link in the website icon under my user name on the left.

-
The new battery plant in Hungary has just started being built. It won't be fully completed until 2022.
SK Innovation Breaks Ground for Its First European Battery Factory in Hungary and
SK Innovation held a groundbreaking ceremony for the factory to produce EV batteries in Hungary 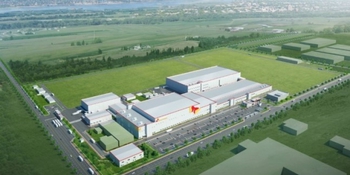 SK Innovation announced on March 8 (local time) that the company held a groundbreaking ceremony for an EV battery factory in Komarom, Hungary. This plant is SK Innovation's first European battery manufacturing facility and is expected to play a key role as a bridgehead into the European market....
SK Innovation is planning to start production and supply in earnest in early 2020 after the completion of the plant in the second half of 2019 after the stabilization of the facility, a trial run and product certification. In 2022, when all production lines are completed, electric car batteries of 7.5GWh will be annually produced.

As for which of the new EVs get the existing batteries from the Seosan plant that I mentioned above, we are still unsure.

Despite the K ona already being released we know nothing about the battery. Who makes it? What cell chemistry? What TMS?
Lots of rumours, but no facts as yet.

There is no Stonic EV.

New Soul EV is also rumoured to use the same 39.2kWh battery pack as in the K ona EV. But who is going to make it?

That the Hungarian battery plant won't be ready for 3 more years, suggests that the batteries for M ercedes new EQ series of EVs must be coming from Seosan for now.

According to this article there are 26 megafactories, planned or in production. 49% in China. 23% in EU and 15% in US.
- Rise of the lithium ion battery megafactories: what does 2018 hold?

The LG plant will open in first half of 2018 and be complete by June 2020,. - LG Chem delays European battery megafactory
This article suggests that LG Chem production started in Jan 2018. - LG Chem to supply battery packs for Jaguar’s first EV
SK is investing 840.2 billion Korean won ($745.5m) whereas LG is investing 400 Korean billion won ( $355m)
SK site is - 430,000 ㎡ compared to LG 41,300 ㎡ ( I think the LG area stated in the article is wrong)
LG Chem does not say the output capacity of the factory -just that it can produce 100,000 batteries. The size of the battery is unknown.
The article on megafactories states 5GWh. That is 10% the size of T esla's Gigafactory in Nevada.
Rumour here suggests LG Chem will soon triple production to 300,000 cars. - Local EV battery makers expand into the EU

The Samsung SDI battery plant in Goed, Hungary is expected to begin in the second quarter of 2018. - Samsung SDI completes its European battery gigafactory
Samsung is also investing 400 Korean billion won ( $355m) on a 330,000 ㎡site. see - Samsung SDI launches construction of its plant for battery production in Hungary
Samsung does not say the output capacity of the factory -just that it can produce 50,000 batteries. The size of the battery is unknown.

Also some new about the mineral supplies need to make these batteries. SK has been sourcing from Australia.
Australian Mines shares surge on cobalt deal with SK Innovation
Australian Mines - Investor Presentation April 2018

LG Chem has also been sourcing from Australia.

Samsung is going to Chile
POSCO and Samsung SDI Selected as Cathode Producer in Chile
Last edited by JejuSoul on Tue Jul 03, 2018 8:38 pm, edited 3 times in total.
The codes for using Torque Pro can be found by clicking the link in the website icon under my user name on the left. 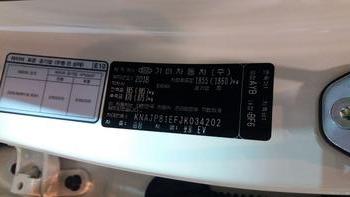 As always Norway is the top market. Over 1/3 of all Soul EVs are in Norway. : Norwegian Kia Soul EV registrations

For all cars exported out of Korea ( about 85%) see : Kia: Investor Relations - Monthly Sales Results
You need to download the Overseas Retail Sales spreadsheet.

The Seosan battery factory would need to provide 330 MWh of battery cells to make these 10,000 Soul EVs each year.

Supposedly the annual production numbers will be K ona EV 18,600 and the N iro EV 21,000.
from Hyundai-Kia Motors to Increase Annual EV Production to 100,000 Units
So in 8 months Hyundai may be able to make 12,400, and in 6 months Kia may be able to make 10,500
Both cars will easily have a much higher demand than this.
-
Last edited by JejuSoul on Wed Jun 27, 2018 9:09 am, edited 5 times in total.
The codes for using Torque Pro can be found by clicking the link in the website icon under my user name on the left.

If this is really an emission scam whereby these cars will soon be sent to Norway then we should evidence of this in the Norwegian figures.
At present there is no such evidence.

More likely this is just biased reporting from InsideEVs.com. The total European sales for the Kia Soul EV in April were 659.
The 751 figure must include other cars, for example the N iro PHEV.
The codes for using Torque Pro can be found by clicking the link in the website icon under my user name on the left.

The Soul EV is sold as used car in Norway, so you want see it in the Norwegian figures as a new car.

I think there are plenty of evidence that Kia is sending Soul EV to Germany for some days and then they are brought to Norway to be used and sold there. But it is not illegal and I don't see it as a emission scam. Just German Kia dealers that can't sell the Soul EV so they send them to the lucky Norwegians

Why would norwegian car buyers talk about it if it didn't exist?
https://elbilforum.no/forum/index.php?topic=39025.0

Why would the norwegian Kia dealer promote that you buy Kia from them when you can't buy from someone else?
https://kampanjer.kia.no/derfor-bor-du- ... a-hos-kia/

The German paper Der Spiegel has done some investigation too
https://wikivividly.com/wiki/Kia_Soul_EV

The evidence goes on and on


The real problem is the german (and others) auto industry that has fooled the politicians and people that diesel is the best.

-
The Norwegian sales figures are done by the registration plates issued.
If you look you will see Import on the right hand side.
Nei means no. Ja means yes.
The total sales for April 2018 is 447
The current sales for May 2018 is 287
I agree many of these are imported, but not all. Obviously there cannot be 751 imports.

More importantly 751 in Germany is greater than the total of Soul EVs sold in the whole of Europe.

The story about cars from Germany being trans-shipped to Norway has been discussed already. Two years ago! On page 1 of this thread.

Birkeland wrote:... Many of the EVs sold to Germany ends up in Norway. I live in Norway, and my car comes from Germany as part of a shipment of about 200 cars. The ship arrives at Germany where they are registered so Germany can fulfill an environmental quota of EVs. The next day, the ship continues to Norway where KIA dealership is getting the cars. The demand of KIA Soul EV in Norway has been so high (waiting time for up to 9 months), so KIA Norway are buying cars from other countries to take care of the demand.
....

-
Another site ev-sales.blogspot.com (that I respect a lot more than the one mentioned above) has also reported the anomalous sales result for Soul EVs in April. 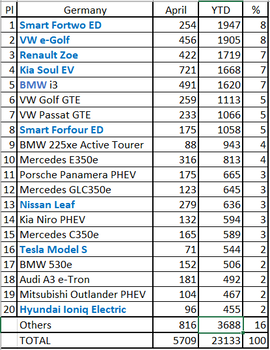 ... the German PEV market always delivers surprises, and April was no exception, the Best Selling model last month was the Kia Soul EV (721 units), even if most units end up in Norway (It wouldn't be the first time), this was the best performance for the Kia in 28 months.

They list the numbers for the N iro PHEV separately, so the 721 doesn't include those. It's now harder to see how the sales of the Soul EV in Germany are greater than the sales for the entirety of Europe.

The German data is freely available each month from the German Federal Automobile Transport Agency (KBA)
It is German only. Start here - https://www.kba.de/DE/Home/home_node.html
Click Statistik then Fahrzeuge then Neuzulassungen then Monatliche Neuzulassungen
From that page you can download a PDF file with all the months data.
The 721 figure is correct, but the German Agency has no data showing how many cars are leaving the country.

Because of this I decided to look at the Norwegian data. Here is a chart that shows the total number of Kia Soul EVs in Norway broken down into those directly imported, and those 'sold' in another European country and then shipped into Norway a few days later. Here shown as imports. 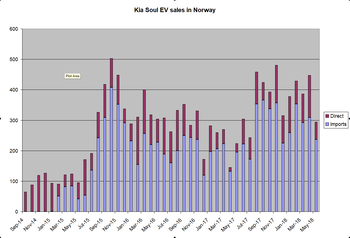 The number of 'pre-sold' cars is far greater than I thought. We don't know where all these cars have been shipped from. Many are from Germany but I have seen reports that they are also coming from France, Spain ....

It means all the data on such sites such as ev-sales.blogspot.com is distorted. They only show the country the car was first sold in, and not where the car actually is.

Further complicating the matter is the fact that it is not only brand new cars that are shipped from Germany to Norway. They also ship used cars. From the Norwegian Forum linked above - https://elbilforum.no/forum/index.php?topic=39025.0

They also talk of new cars being shipped from the US and Canada to Norway. Obviously not an EU emissions scam.

Other news:
SK Innovation will be allowed to sell EV batteries again in China after 2 years of Chinese government blacklisting all the Korean Battery makers.

-
Last edited by JejuSoul on Thu Apr 04, 2019 8:08 am, edited 1 time in total.
The codes for using Torque Pro can be found by clicking the link in the website icon under my user name on the left.

For all cars exported out of Korea ( about 85%) see - : Kia: Investor Relations - Monthly Sales Results
You need to download the Overseas Retail Sales spreadsheet.

Update - 17 June 2018
Kia has rejected SK Innovation's new NCM811 chemistry at the last minute.
I can only assume they have just had some bad news while testing this.

N iro EV will no longer use the NCM811 batteries - it will now be NCM622 - still SK Innovation. 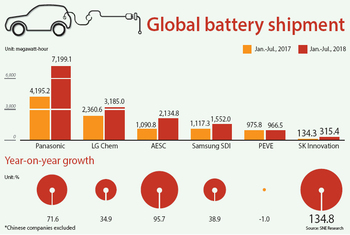 The Soul EV sold the same this year as last year so the figures given in the news article are garbage.

What is not stated is that production of batteries for the N iro EV began in July.
Battery production in the future will obviously more than double, because the N iro has a 64kWh pack.
-