-
A news article by Reuters :
Hyundai Motor to recall Kona EV in South Korea over concern of fire risk

Hyundai Motor Co will voluntarily recall its Kona electric vehicles as a possible short circuit due to what may be faulty manufacturing of its high-voltage battery cells could pose a fire risk...
13 incidents of fire involving the Kona EV, including one each in Canada and Austria, have been documented...

Am hearing the recall will be a software fix to reduce charging speeds. Will update when I know more.

JejuSoul wrote:...
There seems to be a common fault in the Kona 64kWh Electric where a single cell failure causes a big drop in range.
This happens to new cars with low mileage, so I assume this is a manufacturing defect not deterioration.
...

Last edited by JejuSoul on Fri Nov 13, 2020 9:12 pm, edited 1 time in total.
The codes for using Torque Pro can be found by clicking the link in the website icon under my user name on the left.

-
The Good news for us is that there is no issue with Kia Cars.
Either the Niro EV or the new Soul EV.
They share the same BMS and thermal system as the Kona, but use SK cells not LG.

More news on the problem with Kona EV.

It seems that all the 13 fires were caused by L2 charging, and most occurred after the SOC reached 100%.
None of the 13 cars had the new BMS update.

The rumour about slowing the charging speed seems not to be true. But am not certain yet.
A new rumour suggests that all owners of the Kona EV will get $500 compensation for the reduction in charging speed.

The actual software 'fix' is an update to the BMS. This update began in March 2020.
(It doesn't fix the cells, it just warns you that the cells are faulty - and disables the conditions that could case a fire if they are.)

1/ It fixes an issue where battery cooling wasn't working, and where batteries could warm up to 50C or 120F or higher.
2/ It imposes new validation at startup and throws faults if any of the cell groups deviate by more than 0.1V from the others.
3/ It does a better job of keeping the 12V battery topped up.

The real issue is faulty cells. Presumably the updated BMS will be able to detect the problem before it becomes dangerous, and the cars with faulty cells can get their battery replaced. LG Chem is denying it is their issue, but it does seem obvious that this is the main fault.
The problem has been stated to be with the battery separator.

Ericy wrote:... I had the BMS service done today. At the time it seemed to go OK - I got home at dinnertime. Just now I go to plug the car in. Aaaand it won't charge...
...
The cell deviation has to be < 0.1V. The original TSB comes right out and says this - if you come into the shop with more than this they need to replace the battery *first* before attempting to apply the software update.

If they skip that check, then you end up in my situation - it throws a fault if you try and charge the battery, and the car has to go and sit at the dealership until a replacement battery becomes available.

I should note that I believe my car was right on the edge - it is indeed possible that it barely passed the test so they did the update, but by the time I got home, the deviation increased just a little bit - just enough to put it over the edge.

He's been waiting 3 months for the replacement battery.
-

BMS update fail...
The codes for using Torque Pro can be found by clicking the link in the website icon under my user name on the left. 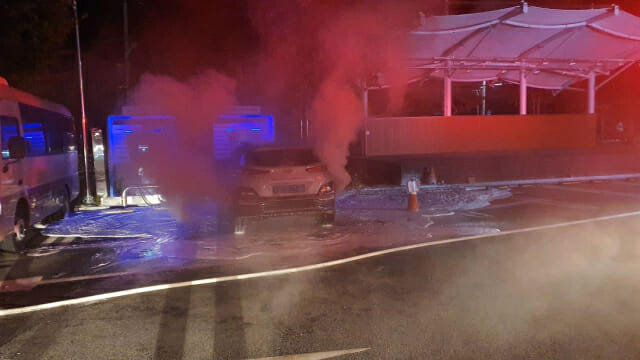 Another Kona fire in Korea. This time while fast charging.

Another rumour. "Some Kona's in Korea use SK Innovation batteries, not LG Chem".
This rumour seems to be obviously false since both Hyundai and SK deny it.
However this statement contradicts that fact and confuses the issue.

... a recent announcement shared with Hyundai Motor's Blue Hands (service partners) said, "Among the OSEV (meaning the code name of Kona electric vehicle) BMS software updates, there have been confirmed cases of problems occurring after updating SK's batteries. If BMS updates are made to vehicles equipped with SK Innovation's batteries, warning lights that the level of cooling water will be exceeded can be lit.

Update: this rumour is true. Hyundai now admit, some Kona batteries are SK, but all the fires are LG.

A total of 31,841 electric cars were sold in Korea for two years and four months from May 2018 to September this year. Among them, SK Innovation's battery-equipped vehicles account for about 3% to 6% of the total number of units sold.

But there are SK Innovation batteries In European-made Konas from March 2020. These cars are not recalled.

...In a press release for (the InterBattery 2020 exhibition), the company claimed its batteries are the safest in the market because none of its products were involved in fires in the EVs or energy storage systems....
SK Innovation is thought to have supplied batteries for 12,000 Kona Electric vehicles built at Hyundai Motor's plant in the Czech Republic. These are not subject to the recall. According to sources, in supplying batteries for the Kona Electric, SK Innovation mixed its NCM811 and NCM523 chemistries and that played a significant role in improving stability...

This article is blaming the Kona battery fires on the fact that the Kona pack has a very low safety buffer.

LG Chem has made a strong defence against the claim that the battery fires are the fault of the cells. They state it is the ignition event that starts the fires. The reason for the ignition is unknown.
This defence makes sense. In our cars the safety buffer reduces as the car ages. This does not make the car more prone to fire. Also there are plenty of cars with degraded and faulty cells that have voltages well outside the normal range. These cars also do not catch fire.
The codes for using Torque Pro can be found by clicking the link in the website icon under my user name on the left.

-
The Bolt EV has been recalled in the US because of the risk of battery fires.
GM recalls 68,667 Chevy Bolt EVs (’17-’19) citing unlikely potential fire risk

The issue of faulty cells in the Bolt EV seems identical to the problem in the Kona EV. Both use LG Chem NCM 622 manufactured at the Ochang plant in South Korea. I think this closes the idea that the reason for the Kona EV fires is that it had a smaller safety buffer than the Bolt EV.

I brought the car to the dealer on 2 separate occasions with concerns of a faulty battery. The battery suddenly stopped charging fully. However, I was told by the dealer twice that the battery was functioning properly and there was nothing they could do. I opened a claim with GM regarding this incident, asking them to replace the battery, since it was still under warranty, and there was clearly an issue. After months of back-and-forth, GM closed my case stating it was normal degradation of the battery. One week after they closed my case, the battery spontaneously caught fire while charging in my garage overnight. It totalled 2 vehicles, charred everything in my garage, and caused such severe smoke damage that almost everything in my home was a total loss. The fire department determined the fire originated from the trunk area, where the battery is. My family is displaced while repairs are being done to my home, at a tune of approximately $200,000 at this point. We lost approximately $105,000 in contents, as well as the 2 totalled vehicles ($75,000).

-
Here's an unusual story from Jordan from someone who claims their 2015 Soul EV main HV battery exploded.

There is a thread with some details here - Facebook: Kia Soul EV Forum

Diaa Shwekie wrote:It happened to me yesterday night, was driving and range showing 60 miles left suddenly turtle sign popup and an explosion sounded from under driver seat and car stopped, smoke started to come up from under front seats and then flames started up...
...flames were coming from battery vents under the seat...
...the flames started with the carpet after the battery smoked a lot of chemicals luckily a lot of people helped me to put it off but after all the damages happened to the main dashboard...
...smoke kept going up for long time after putting of the flames...
...it was imported from USA...
...I was driving this car for almost 2 years until yesterday ...

My first thought is that this must be a DIY battery repair that has gone wrong, but I have no evidence for this.
The codes for using Torque Pro can be found by clicking the link in the website icon under my user name on the left.

Re: Kona EV recalled globally over concern of fire risk.

-
Hyundai announced a global recall of the Kona EV to replace the battery packs.
GM has not announced a similar recall for the Bolt EV , instead they are offering a software fix.

This announcement pops up on the main page of Hyundai's Korean website.

Among the electric vehicles produced and sold by our company for a certain period of time, a defect that could lead to a vehicle fire was found due to a short circuit (short circuit) inside the battery cells due to defective manufacturing of some battery cells produced at LG Energy Solutions Co., Ltd.'s China (Nanjing) plant.
Accordingly, Hyundai Motor Company plans to voluntarily recall for the safety of its customers.

This recall is an operation to replace the high voltage battery system assembly (BSA), and the target vehicles are as follows.
-Kona Electric: Vehicles manufactured from May 11, 2018 to March 13, 2020
-Ioniq Electric: Vehicles manufactured from May 2, 2019 to November 30, 2019
-Electric Buses: Vehicles produced from November 16, 2017 to March 11, 2020
※ For vehicles equipped with battery cells that do not apply the insulation coating of the positive terminal part of LG Energy Solutions Co., Ltd.'s China (Nanjing) factory

Due to the battery material supply schedule, the recall will take place sequentially after 2021.03.29, and details regarding service reservations will be informed to customers through the Hyundai Motor Company Customer Center (02-3488-0010) as soon as possible.

In addition, for Kona Electric and Ioniq Electric customers, adjusting the battery charge rate to 90% before battery replacement is effective in reducing the possibility of fire. The charging rate can be set in the Blue Link app or in the vehicle, and please refer to the video below for in-vehicle adjustment method. [Video check]

We deeply apologize for any inconvenience caused to customers, and we promise that Hyundai Motor Company will continue to do its best for customers with a responsible attitude to actively take action against any single problem.

Here's the recall report from the NHTSA site:- PDF: Safety Recall Report
The codes for using Torque Pro can be found by clicking the link in the website icon under my user name on the left.
Post Reply
Load more posts
6 posts • Page 1 of 1